As is often the case, I found myself this March with dozens of kids who weren’t mine, wanting something cool to do for the day.

Since I (and they) were at the Peterborough Museum and Archives (2 hrs northeast of Toronto) during the first day of their March Break kids program, I figured I should bust out some science and astronomy for a little fun.

Up first was an interactive presentation on the latest science stories in the news (though it was tailored for 7-11-year-olds, said 7-11 year-olds could have been watching an episode of NOVA or The Nature Of Things and still have detailed questions!) 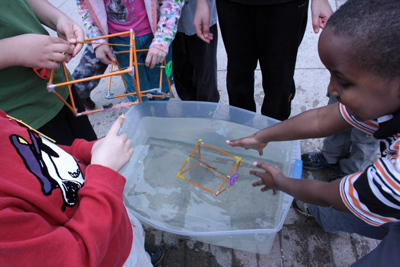 Our next adventure was to (safely) observe details on the surface of the Sun. Though it was cloudy and what breaks there were were barely breaks, I came ready with the right tool for the job – a colossal-aperture 12-inch wide telescope, which (I hoped) would grab enough photons to project out of its eyepiece onto a piece of paper.

Fortunately, for 20 kids (and one very excited parent who stayed for part of the morning) a dozen sunspots larger than the Earth showed up, including a semi-circle-shaped sunspot group.

After that, we moved on to our pièce de résistance for the day – a new idea for working model submarines made out of pencils and rubber-bands: A risky endeavour, but and exciting one that paid-off, as you can see in the image above.

I’ll be filing the idea for future kids programming, as well as in notes for an upcoming book in my Machines of the Future series.