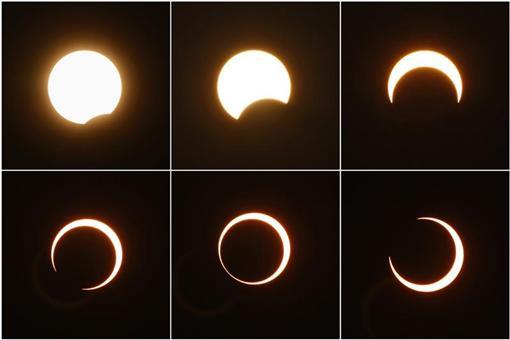 It may not be the Rolls Royce of solar eclipses – a total eclipse of the Sun, with “ring of fire”, Baily’s Beads and all the trimmings. But today’s annual solar eclipse – the BMW SUV of astronomy events, let’s say –  is well worth checking out.

The event (illustrated in this NASA  image of a previous such event) will see the Moon appear to take a “chunk” out of our Sun, as seen from Earth.

And even though we won’t see the dazzling corona visible when the Moon is closer to Earth and blocks out the entire sun, viewers west of BC in Asia will get to see our lone natural satellite move in front of the Sun for a number of minutes.

For viewers in Western Canada, as much as 50% of the Sun will be “devoured”, turning into a crescent shape. While viewers in Ontario and Quebec will only see a wee chunk taken out of our local star – about enough to display a really unambitious Pac Man.

How (and when) to “eclipse-gaze”

Because solar eclipses are so rare (next annual one even partially visible from North America is 2017, with the next total solar eclipse visible from anywhere in Canada and the U.S. happening in 2024) catching this one is still a once-in-a-generation opportinity.

Here are the ways you can safely look at an eclipse, as well as the once-in-100-years transit of Venus coming up on June 5 (never look directly into the sun without a proper solar filter or #14 welders’ glass!!):

Got any images of the eclipse – especially with people in the shot? Share them below or on our Facebook page – We’d love to see them!

1 thought on “Best eclipse for 12 years in North America!”