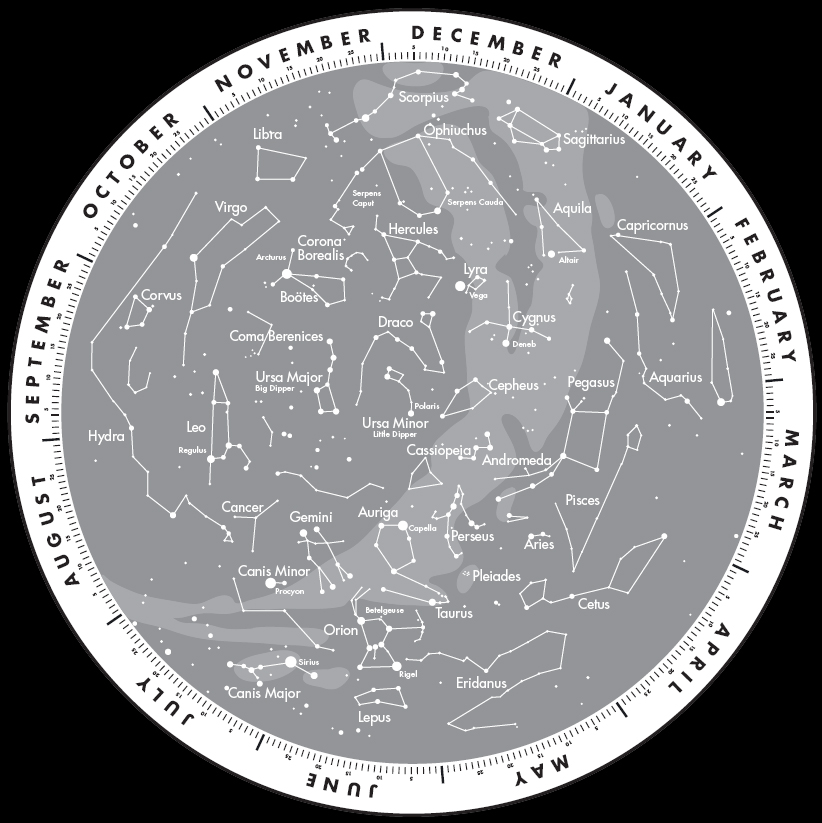 From spring to summer and into fall, there are three major areas of the sky you should get to know: 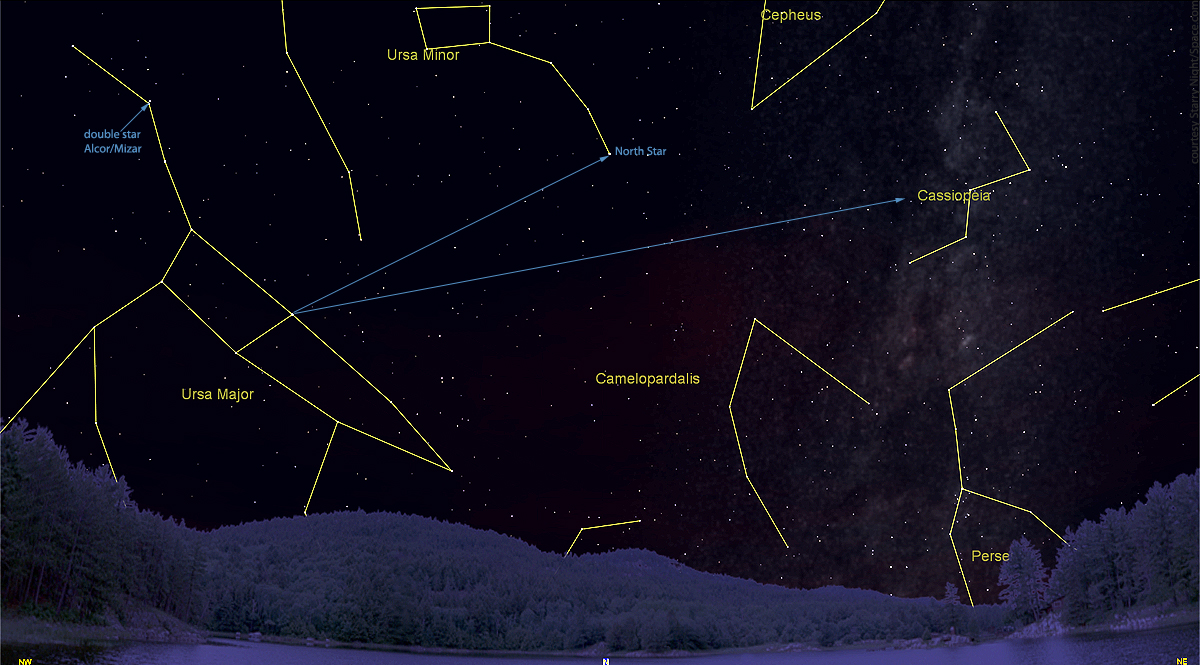 This region of the sky contains the best-known constellation. If you’ve heard of or can already find a constellation, odds are it’s this one.

In the starchart above, the pot-shaped Big Dipper (also known as Ursa Major (the Great Bear in Greek, or Mista Muskwa/The Spirit Bear in Cree and Ojibway) acts like a giant street sign in the sky.

For example, the two stars at the end of the “pot” of the Big Dipper point up (see blue arrow) to Polaris the North Star, which just happens to be the closest bright star in this direction.

You can also picture the Dipper’s handle arcing to the bright orange star Arcturus (just out of this view to the left),  “pouring” into the nearby Little Dipper (Ursa Minor in Greek, also seen as a wolf in Plains Cree), or towards our next stop in the sky, the constellation Cassiopeia… 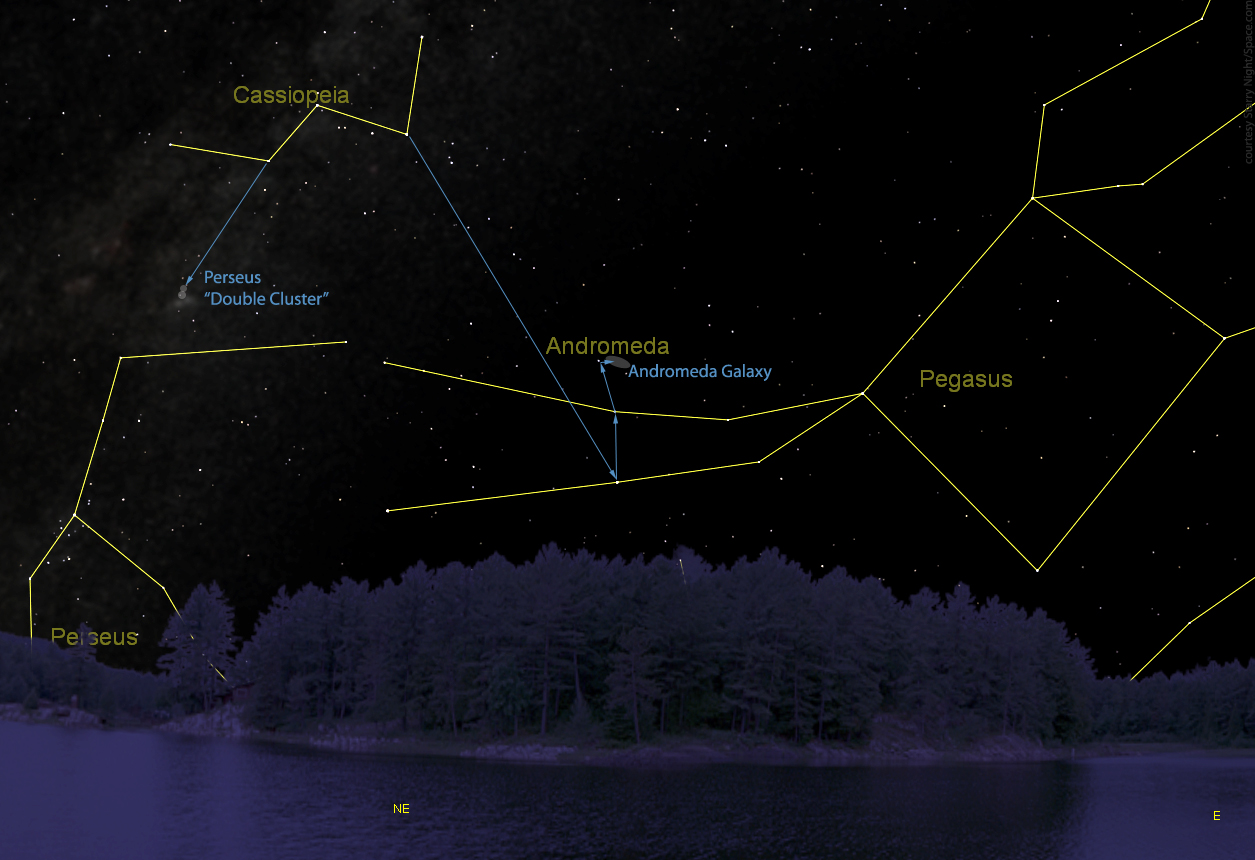 This “W” or “M”-shaped star pattern is meant to conjure images of a queen’s crown from ancient Greek mythology.

Much more than the Big Dipper, this is probably the most important constellation to know that  will help you find interesting deep space objects year-round in the sky.

You can see a rare pairing of two star clusters – full of several thousand stars a-piece – practically pushing up against each other – Just draw an imaginary line from the middle star in Cassiopeia to the next star out in the more open of the two angles in the “W”/”M” as seen via the blue arrow in the image above.

You can also find the closest, easiest-to-see galaxy beyond our own Milky Way by using Cassiopeia as a pointer: To do so, use the more closed of the two angles in the “W”/”M” of this constellation as an arrow that points away from itself to the next bright star nearby (as seen via the really long blue arrow you see pointing away from Cassiopeia in the image above.)

Then, (all this is shown above in blue arrows)  locate the next easily-visible star up (back towards Cassiopeia) from the first star. Finally, continue in the same direction and locate the next easily-visible star after that. You’ll see a dim, fuzzy oval to the right of that final star. Welcome to the Andromeda Galaxy, a city of more than 200 billion stars like our Sun, visible to the naked-eye, in more detail in binoculars, and with its glowing central nucleus in telescopes on low-power. 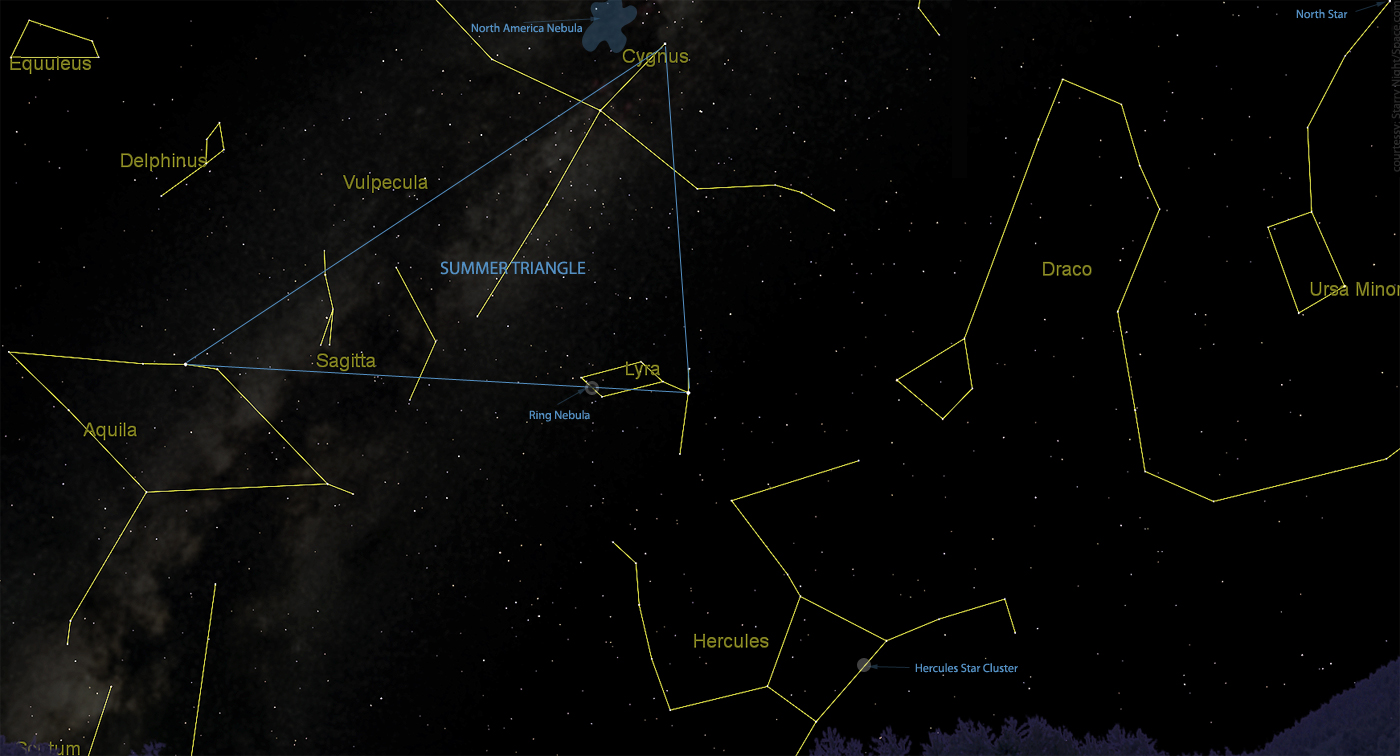 Usually found overhead throughout most of the summer, this constellation of constellations forms the most interesting accessible part of the sky from June through August.

By getting to know the Summer Triangle, you’ll get to know your way to at least three impressive and easy-to-find deep space objects.

As seen above, Cygnus (the Swan in Greek mythology or Niska the Goose in Ojibway) is the direction in which the first confirmed black hole was discovered. While you can’t see that black hole, you can see a nifty cloud of gas nearby called the North America Nebula  to the left of the top of the “Northern Cross” as this constellation is also known.

Under perfectly clear, dark skies, you can see what looks like a dim, grey outline of part of Canada, the U.S. and the Gulf of Mexico, including what looks like Florida. If you can spot this formation amongst the “river” of star stuff in the Milky Way, you’ll be able to catch a little more detail in binoculars or on very low power in a telescope.

The Harp as it was known in ancient Greece plays a sad tune for a dying star: The Ring Nebula is the leftover bits of a red giant sun that has shed off its outer shell to become a white dwarf.

You can see this tiny grey doughnut in the sky as a small puff between the two bottom stars of the parallelogram that makes up the Harp. You can see the ring for sure on low–to-medium power in most telescopes.

While not part of the Summer Triangle, the “keystone” of Hercules, to the right of the Triangle, features one of the coolest treats from the summer sky.

Home to hundreds of thousands of stars, bound together by gravity and time, the Hercules Cluster is a tiny starburst well worth learning how to find.

As seen in the map above and in the image here, you can look through most telescopes to resolve the stars in all but the star-packed centre.

While also not part of the Summer Triangle, it’s interesting to note that Delphinus the Dolphin – just to the left of the  Summer Triangle – is a Loon in Ojibway First Nations lore.