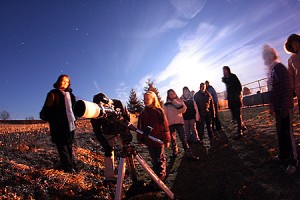 A few months ago, I set out into the Canadian wilderness with a selection of Sky Watchertelescopes, and a pair of Canon image-stabilized binoculars furnished by my gear sponsor EfstonScience of Toronto (more on that here.)

With this gear, I recently took several families out to some Eastern Ontario conservation areas to have them put this gear – and the views it yielded – to the test.

I met our second test-group (you can see the results of the first “Family Test Drive” here) of six families south of the Northumberland Forest – about an hour east of Toronto – to show them views of Venus, Jupiter, Mars, a waxing first-quarter Moon, the  Orion Nebula, the Pleiades star cluster, and the Andromeda Galaxy through a 5.1″ Sky WatcherHeritage P130 reflector, Sky Watcher Black Diamond ED80 3″ refractor, Sky Watcher 12.5″ reflector, and a pair of Canon 15×50 image-stabilized binoculars.

Also on-hand were an iPad with a variety of astronomy apps and a Celestron Sky Scout GPS-based “star-finder” personal planetarium.

The reviews are in:

In their own words, unbiased and unedited, here below is what the group thought of the gear and the views it provided:

“What I really thought was neat was to be able to see the moons (read the rest in the original post, at Telescopes.ca…)