It all started when a group of astronomy club members from Montana couldn’t make a planned guided stargazing weekend for visitors to Waterton Lakes National Park in Southern Alberta: “OK we’ll hire you…the free guys can’t make it” was basically the opening email from Parks Canada.

After sorting out the details and doing some last-minute promo, I was off to the Rockies to wrangle some crowds of skygazers in cattle country. The hook: We’re under some of the darkest skies in the Canadian Rockies (the southern end of Jasper’s Icefields Parkway being the darkest) among one of the most beautiful tourist destinations in Western Canada… 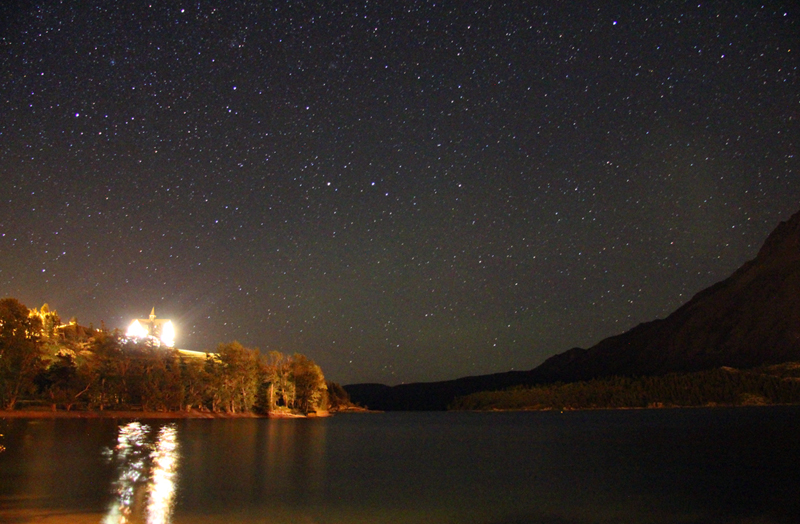 …AND we just happened to get a week straight of perfectly clear, dry skies during a new moon.

From seeing the Milky Way in the middle of Waterton’s Town Site campground to watching the International Space Station pass over Waterton Lake and the park’s iconic Prince of Wales Hotel, the heavens didn’t disappoint:

A Thursday crowd of 60 at the Crandell Mountain Campground and a Friday group of 120 folks in town (not to mention a few hundred who saw the Sun projected onto an easel on the main street by the local ice cream parlour during the day) got to try out the latest stargazing gear, from GPS starfinders and iPad apps to image-stabilized binoculars and portable camping telescopes. 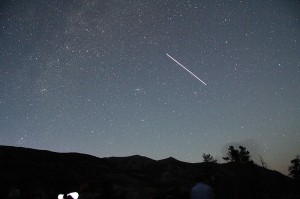 Visitors who drive through the park gates this summer will get the current season’s park newsletter/paper with a front page headline article about the park pursuing a dark sky designation along with the NPS’s Glacier National Park, which Waterton butts-up against at the Alberta/Montana border.

If the designation goes ahead – anywhere from months to years from now – the area would be the world’s first “cross-border” dark sky area.

Where to go, what to do

Whether or not that becomes a reality, I will most likely be doing a future Wilderness Astronomer column on the area in a 2013 or 2014 issue of Sky News magazine (the list of new, unreported, or up & coming dark sky areas in Canada is so large that I’m more-or-less booked-up for locations to write on through 2013.)

Meanwhile, if you’re in the area, be sure to check out the skies out on the lake or at the Crandall Mountain Campground’s waste disposal parking lot (which is basically a gravel turnaround with an amazing view.)

Places to stay include any of the hotels or motels as well as the Parks campgrounds or – if the park is full – accommodations in nearby Pincher Creek to the north.

Places to eat that I HIGHLY recommend include Pearl’s for breakfast (try the Orange Ya’ Happy french toast or Happy Hiker breakfast sausage & egg wrap – among the best I have had anywhere) and the “world-famous” Zumm’s fried chicken.

Also, be sure to take a cruise of Lake Waterton and if you’re not staying at the Prince of Wales, you can still go there by taking in a meal.

2 thoughts on “Could this be the world’s first cross-border dark sky park?”