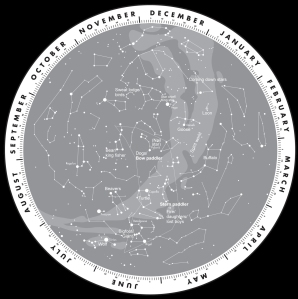 As-promised, here’s the star chart of a whole sky filled with a selection of until-recently-lost constellations mentioned in my latest column in the July/Aug 2015 edition of SkyNews: These are the constellations of the Ojibway, Cree, Blackfoot, and other First Nations of what is now known as Canada.

The chart you see here is the first-known all-sky view of many of the characters from this land as seen as patterns in the sky thousands of years ago in pre-European times.

Background research for this resource was made possible (and more on the constellations above can be found) by working with three main sources:

* information obtained from First Nations educators Wilfred Buck and Rockford McKay – long time friends, colleagues and science specialists with the Manitoba First Nations Education Resource Centre run with the provincial government in Winnipeg and many talented and passionate educators from dozens of traditional and modern backgrounds

I hope this space can be a spotlight for more First Nations star patterns, respecting whatever way oral tradition and the wishes of the people I have learned of the patterns permit.

One example is a story of a flock of hunting birds and their quest to bring down a rogue spirit bear, as told in a video I co-produced with youth at Manitoba’s Turtle Lodge for the First Nations Friendship Centres of Canada and www.storiesofthenightsky.ca (VIDEO)

Finally, here’s a variation of that story, this time, from a video created to tell the Mi’kmaq First Nation tale of “Muin and the Seven Bird Hunters”: